End Your Valentine’s Day With The Walking Dead – Returning this Sunday Night! 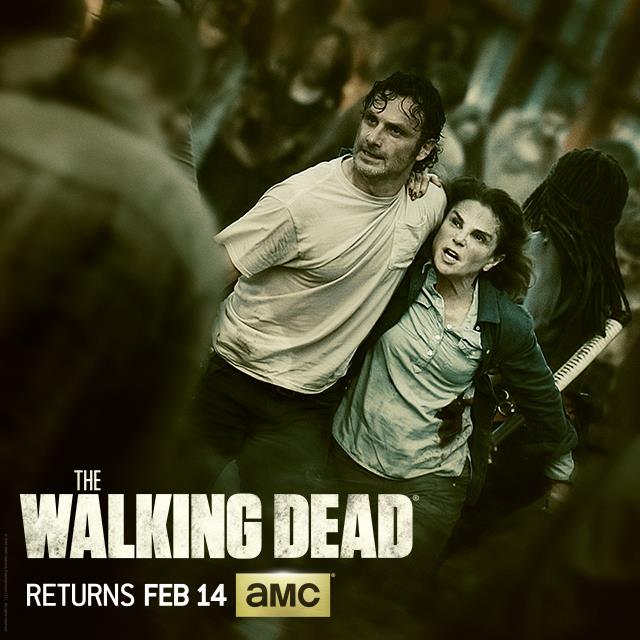 This Sunday may be Valentine’s Day but it is also the long awaited return of AMC’s The Walking Dead! Couples (and non-couples) all over the nation will be participating in their usual holiday festivities, but this year, tons will end the night off with the first episode of the second half of the show’s Sixth Season. The Walking Dead’s latest episode aired on Sunday, November 29th, leaving fans in limbo as they were forced to wait over two months to watch again. Now, the wait is finally over!

Before you continue reading, we are warning you that there are some spoilers ahead! So, if you haven’t caught up on the show, we suggest you do so first.

Let’s recap a bit: during the mid-season finale, titled “Start to Finish,” fans were lead to believe that something terribly bad was about to happen. Then, the writers did what they do best – made us wait! Yes, the crew’s safe place is now completely infested with walkers, but a lot of fans were on the edge of their seats waiting for a huge death to occur. Although Deanna has been bit, she was never an original member of Rick’s posse, but she accepts her fate pretty calmly, as Michonne is by her side. She even decides to fight as much as she can in the last minutes of her life, in order to help the others.

As this specific group finds some solace inside Jesse’s house, Father Gabriel lets Rick know that there are just too many walkers, as they begin to break through the door and windows. It’s at this time that Rick decides to trick the walkers by covering themselves in the blood and guts of the undead. This was something fans saw in earlier episodes of the show and it is quite the smart idea, so we’re glad he thought of utilizing it again, making it easier to get through the herds of zombies.

As fans continued to watch, many believed Carl was going to get shot, maybe not killed, but shot by Ron. Fortunately enough, Rick taught his son well and Carl was able to fight Ron off. Glen has also made his return (which we had to wait for as well), while Maggie, who is pregnant, is solo at the end of the episode, trapped on the platform. She and their unborn child will hopefully be saved by Glen in the mid-season premiere, as the numerous amounts of walkers are approaching their territory that is no longer a safe zone.

Another problem we are dying to find out about is that with Carol and Morgan. Will they be able to put their differences aside to help everyone? Morgan is doing his best to protect the Wolf from Carol, since he believes just killing him is completely wrong. Meanwhile, Carol wants the Wolf dead (most fans do, too). The two end up fighting a bit, Morgan knocks out Carol and the Wolf knocks out Morgan. (Another reason why Morgan should have never trusted him in the first place!) The Wolf eventually lets the two live, but takes off with Denise. Hopefully we find out what happens with these characters, or we may have to wait until further into the season.

Daryl, Sasha and Abraham are also stuck in a sticky situation, which was shown after the credits at the end of the episode. The three, who have been on the road for the past couple of episodes, are approached by Negan’s followers. This too is something we hope to see on Sunday night, since these three characters are extremely important and would be a huge help fighting off the walkers.

One thing is for sure, it will be quite an interesting episode as we wait to see just how well the main characters and Alexandrians can come together and take on the swarm of zombies. The original cast members are not all together at the end of the last episode, so we are hoping most of them can find each other and fight like they have in the past! But, will the number of undead make this impossible?