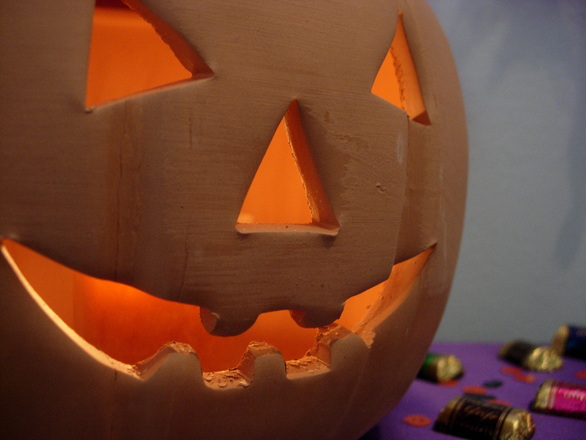 If you are going to be hosting a Halloween party this year, making sure everyone has a good time is one of your main priorities. Halloween-inspired games are a great way to get guests involved, often having hilarious results when watching each other perform tasks in costume. Here are a few Halloween games that are sure to be a hit at your own party!


Pumpkin Balloon Game
Place a large piece of foam board on a wall. Fill orange balloons with candy and confetti by using an oil funnel to push them inside. Blow up the balloons, tie and attach to the board in the pattern of a pumpkin. Have each player take a dart and throw it at the balloon board. All participants will be delighted to see what prizes come out when a balloon is popped. The player throwing the dart will get to keep the prizes. Place some funny notes inside balloons as well to make the game interesting, such as instructions telling the player to do a strange dance. Pumpkin Balloon ideas from Pinterest.

Donuts On A String
Tie several cider donuts to tree limbs using pieces of ribbon. Have each participant stand in front of a donut with their hands behind their back. They must eat the donut in its entirety without it falling to the ground in the process. The first person to finish their donut wins a prize!

Identify The Body Parts
Place out several bowls on a counter top. Fill one with skinned grapes, one with vienna sausages, one with noodles, and one with dried apricots. Have each player blindfolded and bring them into the room one at a time. Have them touch the contents in each bowl. Tell them one bowl is eyeballs, one is fingers or toes, one is brains and one is ears. After they touch the objects, see if they can identify what the real foods are that made up these “body parts”. Whoever gets the most right wins a prize.

Watch Your Words
When guests arrive at your party, give them a list of three to five words that are forbidden to say for the remainder of the party. The list given to each guest will be the same. Make them Halloween-themed, such as “costume”, “scary”, “mask” or “candy”. When someone hears a guest say one of the words on the list, they must hand in the paper with the list and they are out of the game. Ask the night goes on, it may be harder to remember which words were on the list (if alcohol is involved for an adult party). This can also be played at a children’s party.

Battle Of The Balloons
Blow up several balloons and attach pieces of string to each one. Orange and black balloons work best as they are festive Halloween colors. Have each guest tie a balloon to one of their ankles. Put on some fun Halloween music and have the guests try to pop each other’s balloons only using their feet. Hands must be kept behind their backs. Watch how funny everyone looks as they are trying to step on other people’s balloons while trying to protect their own from being popped. Whoever has the last blown up balloon attached to their ankle will be deemed the winner of this funny game.

Mummy Bowling
Purchase toilet paper (Cottonelle triple roll works great) and get some old plastic soda bottles together. Once you have your bottles, use the toilet paper to wrap around each bottle. Once each bottle is mummified, tape the ends to assure the toilet paper stays in place and glue on some googly eyes for the full effect! It’s best to use empty bottles, if they are filled with liquid, it will be much more difficult to knock them down. What should you use as the ball? A roll of toilet paper, of course!

Pin the Eye on the Monster
Create your very own monster on a piece of oak tag (make sure it is large enough to hang up) and cut out eye balls from another piece of oak tag. Once you have your eye balls cut out, hang your monster up on the wall and watch as the kids try to pin each eye ball on the creature! You can use a blindfold so they can’t see or you can simply tell them to close their eyes before beginning.