New England’s Dark Side: 10 Haunted Spots to Visit On Your Next Road Trip 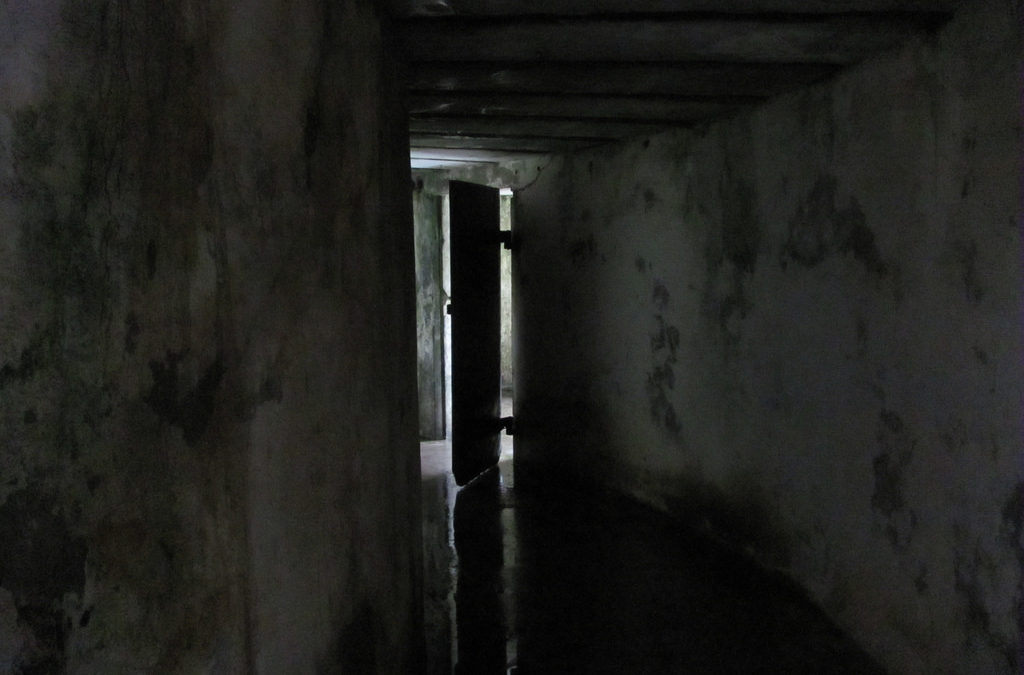 New England is home to some of the world’s most picturesque Fall scenery one will see,  but there’s an eerie side to this Northeastern region in the United States. With an endless amount of creepy destinations located throughout the six states that make up New England, some are more well-known than others and are said to have an enormous amount of paranormal activity.

Whether you’re a paranormal enthusiast or someone who enjoys a good scare around Halloween time, there’s something about these locations that are quite intriguing, causing people to gain interest on the subject. Take a peek below at these 10 truly haunted spots in New England and start planning your spooky road trip!

The Lizzie Borden House – Fall River, Massachusetts
Now operating as a ghost-themed bed and breakfast, this home was once the residence of Lizzie Borden, a girl who was accused of the 1892 ax- murder of her father and stepmother. Lizzie’s father, Andrew Borden was a member of high society, which caused Lizzie to never return to the home after her trial and acquittal. In 1896, the house number was changed from 92 to 230 and has operated as a bed and breakfast since 1996. Reports say that the most requested room is the room where Abby Borden, Lizzie’s stepmother, was found murdered. The Fall River Historical Society currently promotes the home as a tourist attraction. Witnesses have reported seeing apparitions and have heard strange noises at the location. 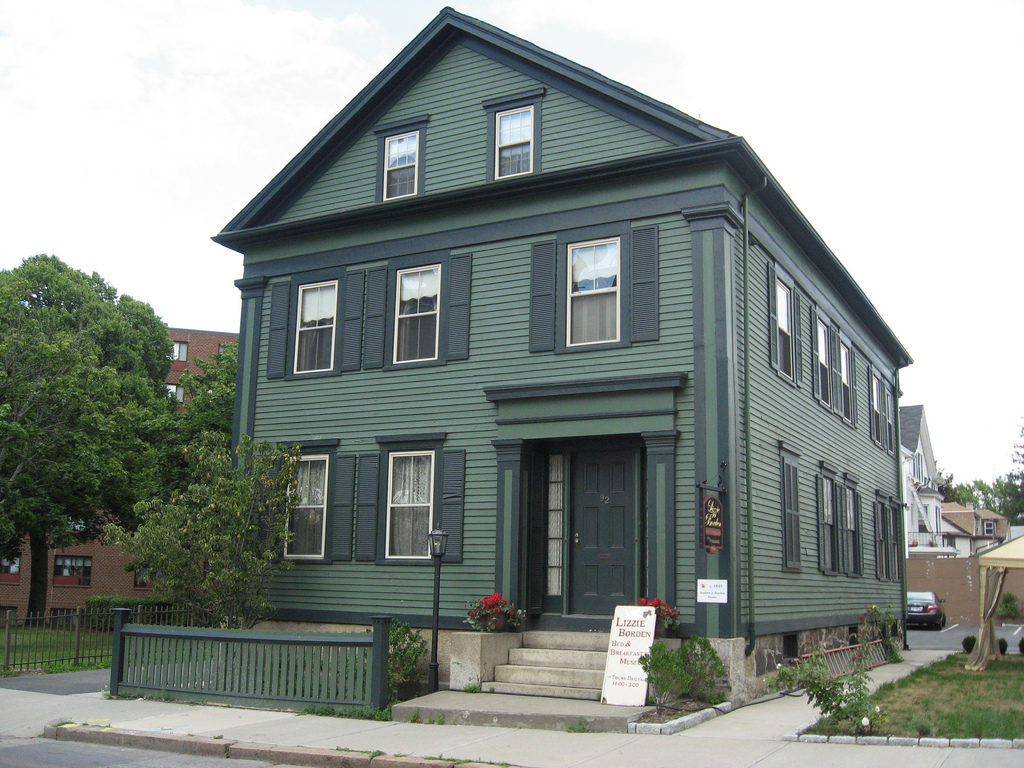 Emily’s Bridge – Stowe, Vermont
Also known as the Stowe Hollow Bridge, or Gold Brook Covered Bridge, the wooden, covered structure has quite a history surrounding it. Dating back to 1844, the bridge has witnessed some tragic incidences, including the death of a young woman, who is said to linger the area in spirit. Locals have reported eerie occurrences while near the bridge, including mysterious banging sounds that echo throughout the bridge, screams, footsteps, laughter, squeaking rope and scratch marks that appear on parked vehicles. Some have also reported seeing a white apparition that floats near the entrance of the bridge. 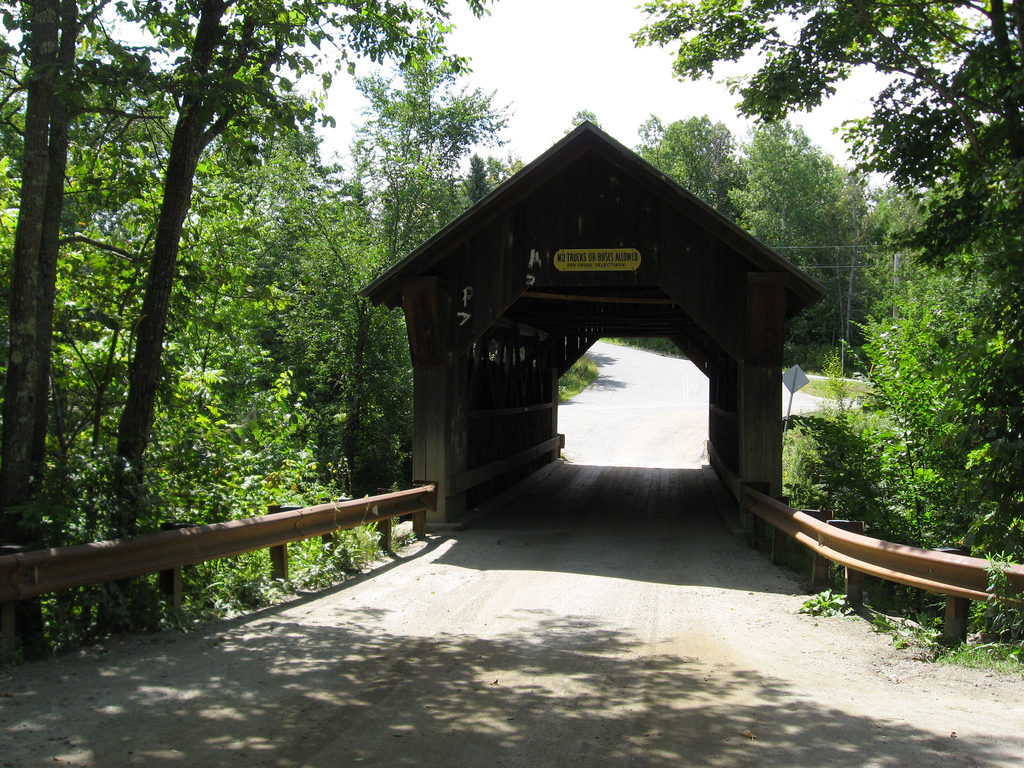 The Sterling Opera House – Derby, Connecticut
Dating back to 1889, this opera house was constructed by the same architect who designed the famous Carnegie Hall in Manhattan and became abandoned in the 1960’s. Believed to be truly haunted, the destination was investigated on an episode of Ghost Hunters in 2011 and many have reported suspicious occurrences at the location. Among the reports include orbs, shadowy figures and objects that move on their own. The opera house was added to the National Register of Historic Places in 1968. 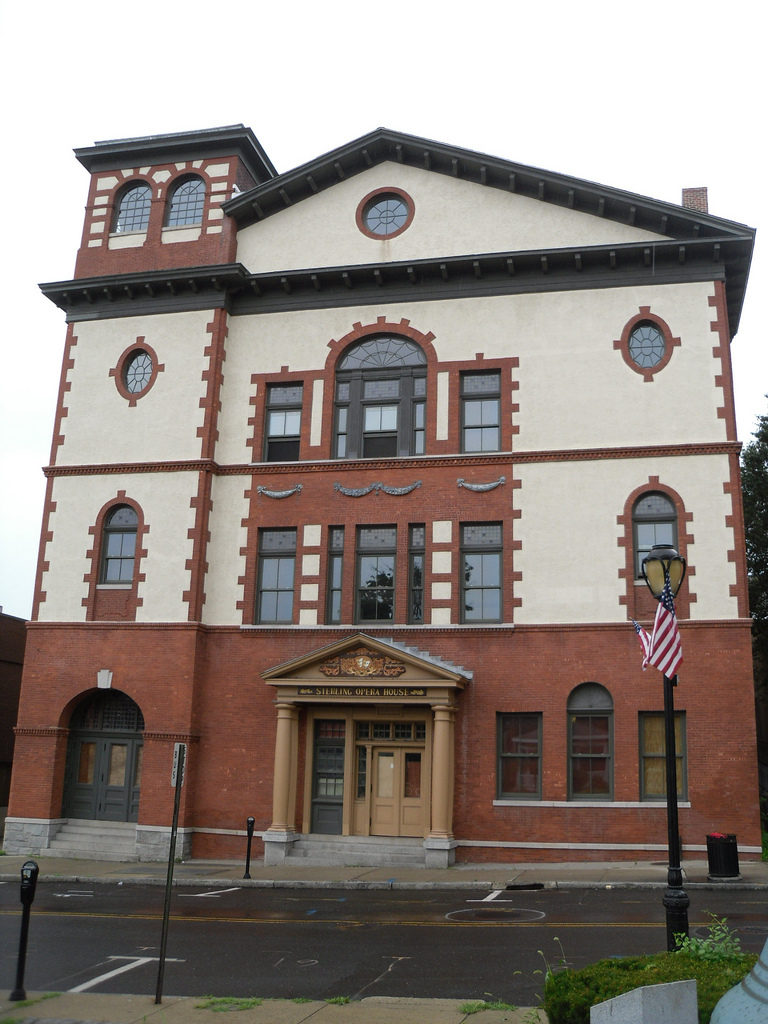 The Houghton Mansion – North Adams, Massachusetts
Once featured on an episode of The Travel Channel’s Ghost Adventure’s, this mansion has been transformed into a Masonic temple that is said to be haunted. The home dates back to 1897 and was owned by Mayor Albert Charles Houghton, a real estate entrepreneur from Vermont. A tragic car accident occurred, killing family members and friends of Houghton, which was said to cause the suicide of his chauffeur just nine days after the horrific event. The chauffeur is rumored to linger the home to this day, along with Houghton himself and his daughter, Mary. Paranormal investigations are available at the location for those who are interested in seeking out the ghosts themselves! 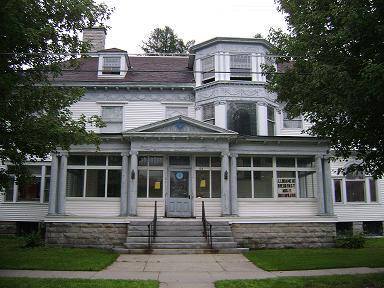 Pine Hill Cemetery (Blood Cemetery) – Hollis, New Hampshire
One of the most well-known haunted cemeteries in all of New England, this old cemetery was established back in the 1700’s and is really named The Pine Hill Cemetery, but frequently goes by its nickname, Blood Cemetery. The name is attributed from the Blood family who is buried in the central region of the cemetery. According to the cemetery’s website, many believe Abel Blood wanders the grounds in spirit, his headstone a popular spot for paranormal researchers to study. There have been a number of investigations at Blood Cemetery, some where EVP’s have been recorded and orbs have been spotted. If interested in taking a look around, be sure to do so during daylight hours, the cemetery is closed from dusk to dawn and is sometimes patrolled by police, especially during the Halloween Season. 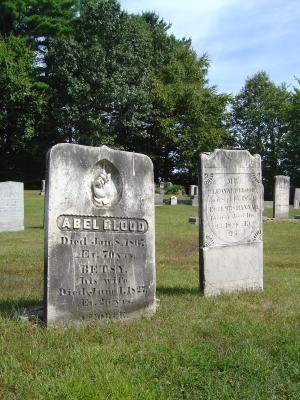 Captain Grant’s 1754 – Preston, Connecticut
Located just a couple of miles from Foxwoods Resort Casino, this historic bed and breakfast dates back to 1754 and has quite the paranormal stories surrounding it. According to their website, Captain Grant’s was the location where soldiers of the Continental Army were garrisoned during the Revolutionary War, and where slaves were sheltered during the Civil War. There is one room that is said to be a hotspot for paranormal activity – The Adelaide Room. Witnesses have reported strange activity in this room, including the vision of a woman dressed in Colonial-era clothing, holding hands with two children. Other reports include the television working on its own and the shower curtain being knocked down by itself. 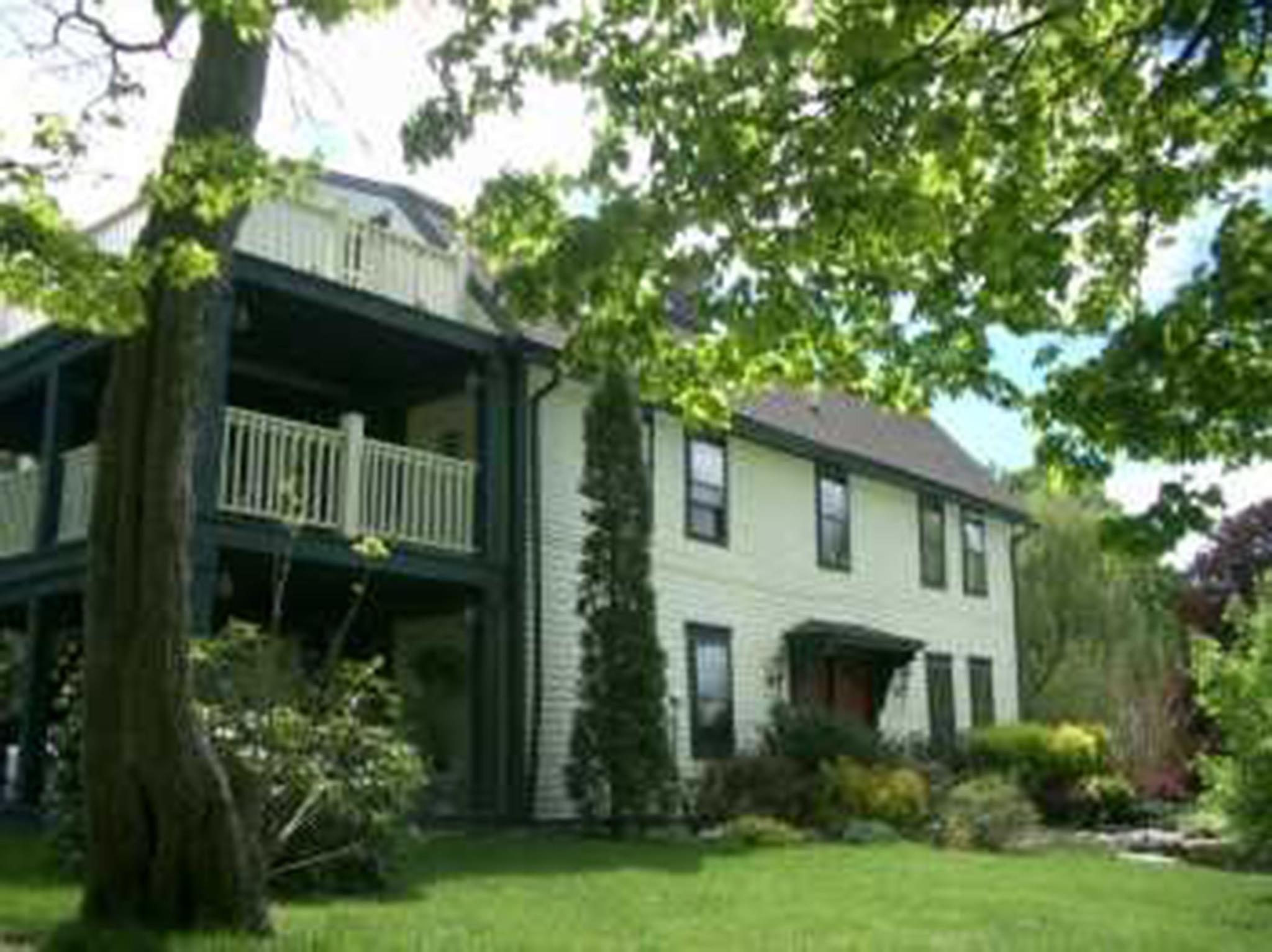 College Hall  – Montpelier, Vermont
Located at Vermont College of Fine Arts, College Hall dates back to the 1830’s and started off as a seminary. It began to operate as a college in 1941 and is said to be haunted by a girl who may have been murdered there. Witnesses have reported hearing her play the pipe organ in the chapel area. 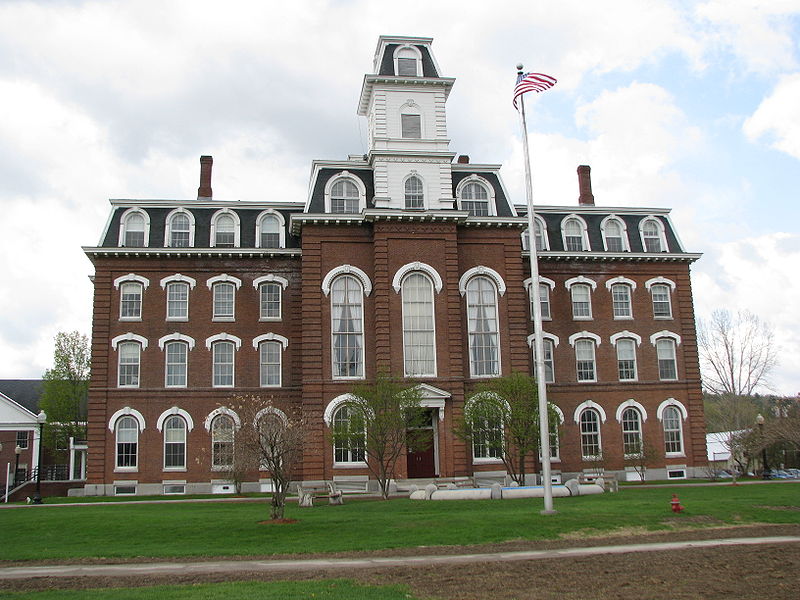 Photo by Sbjohnson, via WikiCommons

S.K. Pierce Mansion – Gardner, Massachusetts
Built in 1875, this mansion was once owned by Sylvester Knowlton Pierce, founder of the SK Pierce & Son Chair Company. The Victorian-style home was originally located at 21 Union Street, but was moved to its current location on W. Broadway shortly after it was constructed. Featured on an episode of Ghost Hunters, Ghost Adventures and My Ghost Stories, the mansion is said to have a number of spirits lingering its halls – some friendly, some not so much. There have been reports of ghostly children running around and furniture that moves on its own on the top floors. 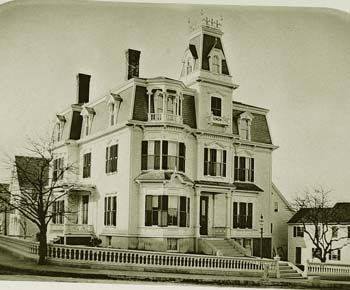 Deerfield Inn – Deerfield, Massachusetts
Now registered as a National Historic Landmark, the 1884 inn began operation when guests would arrive on horseback, in carriages and by stagecoach. According to the inn’s website, the location has been restored and renovated but still holds its rich history. Between the main inn and its carriage house, it now features 24 guestrooms. A hot spot for paranormal activity, the inn is believed to be haunted by more than one ghost. Apparitions have been spotted, furniture rearranged and some guests have even reported seeing a male’s ghost in the rocking chair on the front porch. His spirit is said to especially haunt room #48. 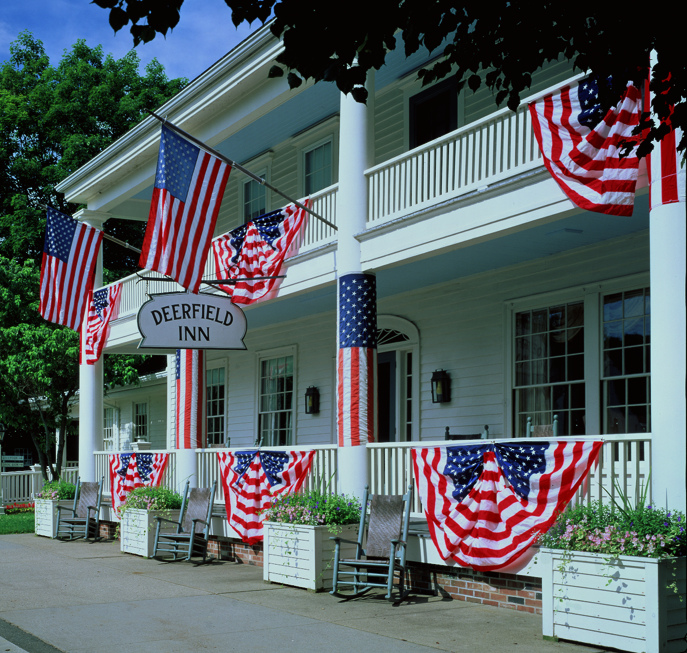 Photo by Massachusetts Office of Travel & Tourism, via Flickr | https://www.flickr.com/photos/masstravel/7656921670

America’s Stonehenge -Salem, New Hampshire
This archaeological site features large rock formations and stone structures over about 30 acres of land. Over 4,000 years old, America’s Stonehenge could very well be one of the oldest man-made structures in the United States, according to its website. Although no one is quite sure who built the structures, many do know that it is said to be haunted by the spirits of Native Americans, among others. A cool site to visit, this spot is surely a great destination to see, whether you’re interested in its ghosts or not! 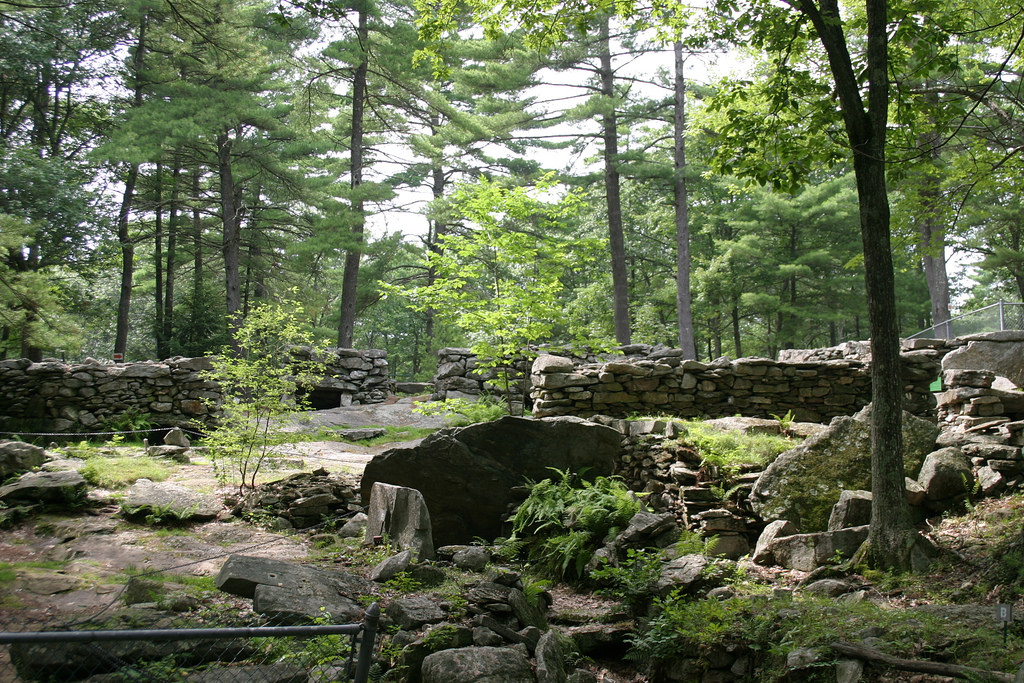 Whether you’re able to hit every haunted spot on the list, or just make it to a few of them, they’re sure to leave a lasting impression on visitors. Be sure to prepare yourself though, you never know when a ghostly friend may want to peek out and say hello!

If you’ve ever visited one of these real haunted destinations, please share your experience with us and fellow ILoveHalloween.com fans by commenting below!